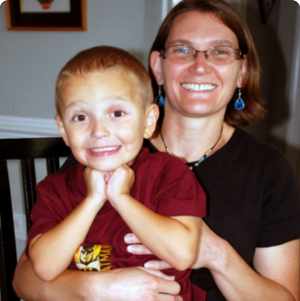 In November of 2008, Kelly and her husband was pregnant with their fourth child. The ultrasound showed that their baby had several complex heart defects. His heart was on the wrong side of his chest and backwards, and one of his ventricles was not formed. They were told that he would need two or three open heart surgeries as a child and that he might possibly need a transplant later in life.

Matthew had his first heart surgery at 3 ½ months old and his second surgery at 3 ½ years of age. On Christmas Day of 2013, Matthew was admitted to Portsmouth Naval Medical Center and the following day, Matthew and Kelly were on a medevac flight to Philadelphia. On January 2, 2014, Matthew had surgery to put in a mechanical valve. A month later, his heart function was poor and his heart could not circulate the blood through his body. The doctors decided that it was time to list him for a transplant, but two weeks later his heart was failing so quickly they did not think he would live long enough to get a transplant.

Four months later Matthew and his family got the call that a donor heart was available for him. The transplant was complicated and lasted about 10 hours, but he recovered amazingly quickly. He was discharged from the hospital six weeks later.

Three months after the transplant, Mathew started kindergarten on time. It's because of a families decision to "Give Life" Matthew is alive today. Today Kelly Brown is a LifeNet Health Ambassador, sharing her story through scrapbooking, public speaking, and community education events.