“Rick always felt that donation was an important thing to do. I’m so glad we were able to honor his wishes and help people.” -Marty Tipton, Rick’s wife 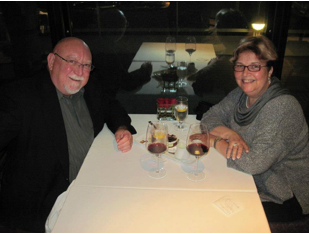 One of Rick’s greatest passions in life was law enforcement. He spent 33 years as a police officer and during his downtime, he enjoyed watching his favorite shows, NCIS and The Closer. He even met his wife, Marty, through law enforcement. Happily married for 34 years, Marty says that she and Rick were “opposites who beat the odds.”

Outside of work, Rick had a full life. He liked to travel—especially by cruise ship—exercised four to five times a week and enjoyed spending time with his family.

Rick had diabetes and dealt with congenital heart issues for several years before undergoing open-heart surgery in 2007 to fix his aortic valve. The surgery worked, but the valve eventually failed in 2016. Rick was not eligible for a second open-heart surgery, so he was scheduled for a transcatheter aortic valve replacement. He passed away during the procedure.

Rick, a longtime registered donor, had shared his wishes to donate with Marty early in their marriage. Their decision has had a tremendous impact. Rick has helped 117 people through donation, including gifts of tendons, ligaments, muscle, bone, skin and corneas. Marty is happy that her husband’s wishes have been honored and that he has been able to help so many patients in need.